May Flowers | Teaching Link Up

Today I thought it would be fun to walk you through a typical crafting afternoon with Noah.  Our weeks are filled with school, swim class, and now soccer and a nature explorers class.  As a result, our mornings are pretty booked.  I try to keep our afternoons free for play dates, trips to the playground, crafts, and some independent play.  Each week, I try to come up with one or two planned crafts where I tell Noah what we are going to make.  Usually that involves me showing him a picture of something I found on Pinterest and then us adapting it to his level and opinions.  As Noah has gotten older, he likes to do a lot of unplanned and totally free-style crafts as well.  As much as I love having a plan, I have found that Noah is pretty darn creative and comes up with some really great ideas!  Who knows, maybe I have a future artist on my hands?

On this afternoon in particular, I wanted to do some crafts inspired by all the Spring flowers and trees we've been seeing.  My all time favorite tree to see in the Spring are the Cherry Blossoms... there's just something about those pink buds that I never get tired of!  So I printed out a tree on some thick cardstock and then gave Noah some pink tissue paper squares and some glue.  He started by squirting a dot of glue on the paper and then sticking the crumpled up tissue paper square onto the tree.  He quickly grew tired of this process and asked for help.  So I squirted a thin layer of glue all over the branches while he crumpled the tissue paper and stuck them all over the tree.  Towards the end he asked if he could just stick the tissue paper on without crumpling it, to which I of course said it was okay.  I love that he comes up with his own ideas but still feels the need to "ask permission".  I also love how he made some of the blossoms falling off the tree :) 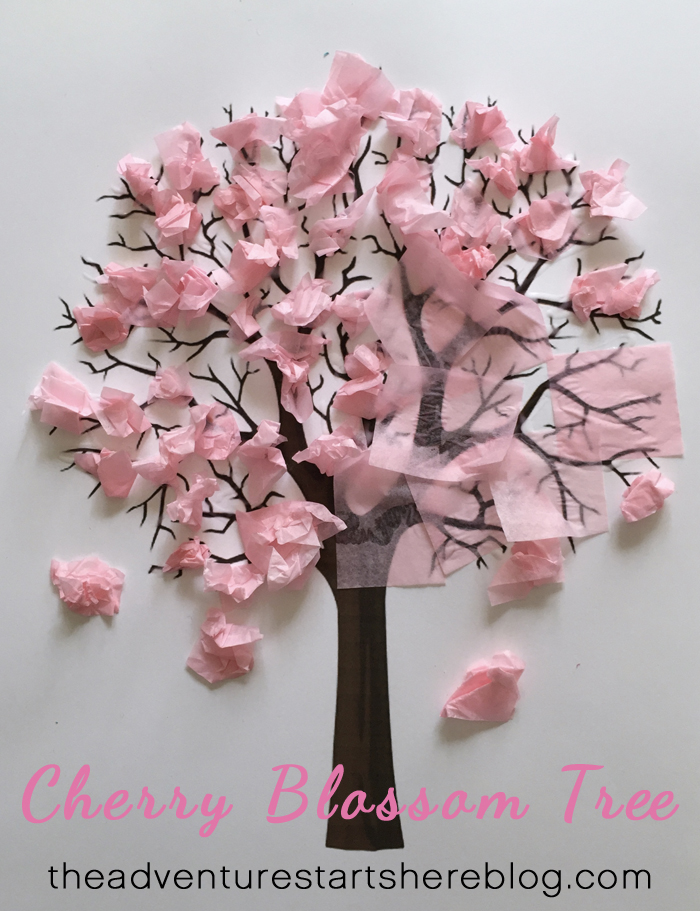 Method:
Crumple up the tissue paper squares and simply attach them to the tree branches using glue.  It's really that simple! 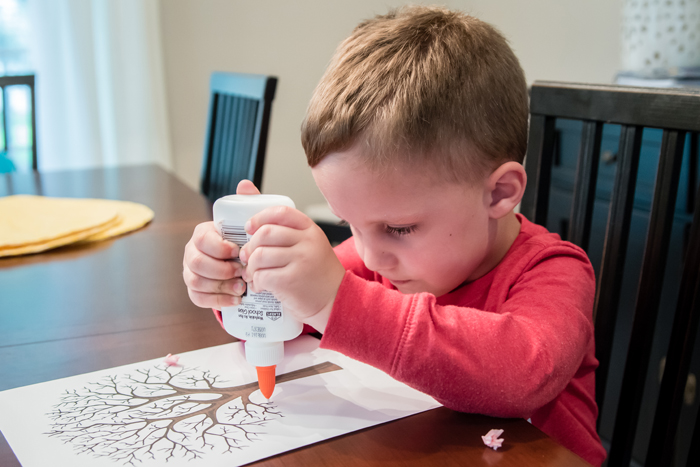 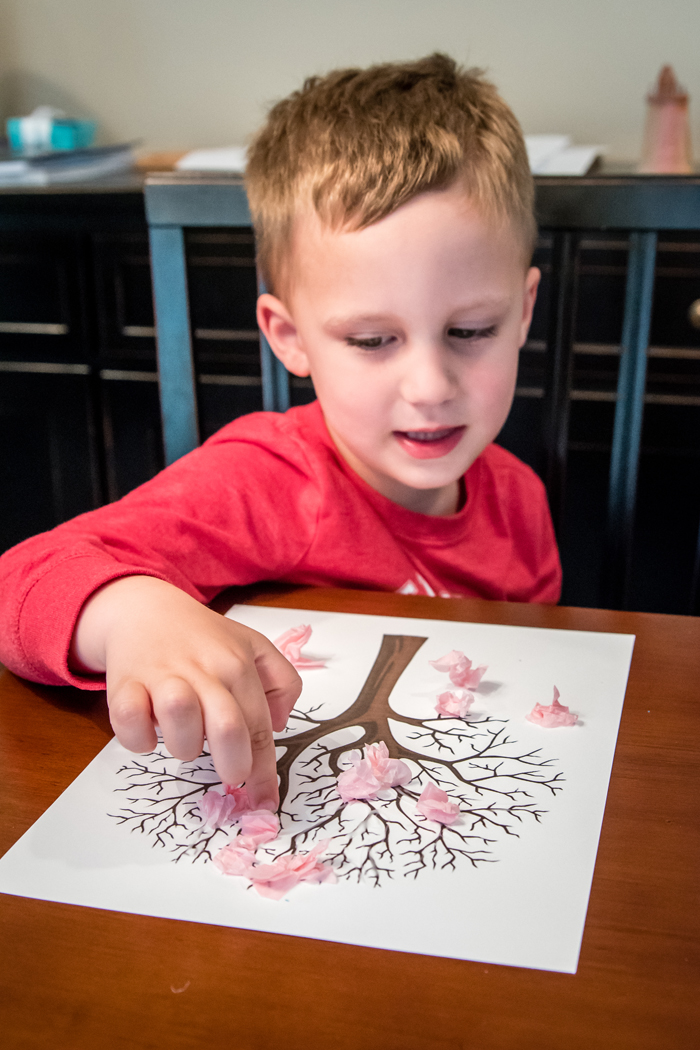 As much as he enjoyed doing the cherry blossom tree, Noah had some ideas of his own.  Before moving onto my next craft, he really wanted to make some Octonauts.  First up, he wanted to make his favorite characters out of play-doh.  He totally took the lead with this and gave me 3 to make and 2 for him to make.  While mine may look more like the characters, I was very impressed at what Noah came up with all on his own!  He then grabbed some crayons, glue, and googly eyes and made the Octonauts once again!  But my absolute favorite was later in the day when I was making dinner and Noah asked for green paper, scissors, glue, and some more eyes.  Then all on his own he made this frog... I was so impressed! 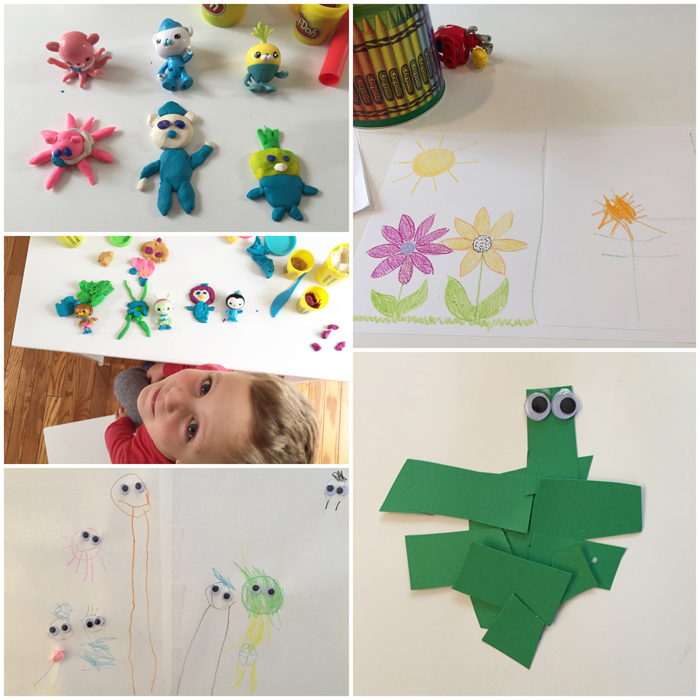 After Noah got his fill of play-doh and drawing, we got back to it with another flower craft I had planned.  Noah was very excited for this one since it involved paint and scissors! 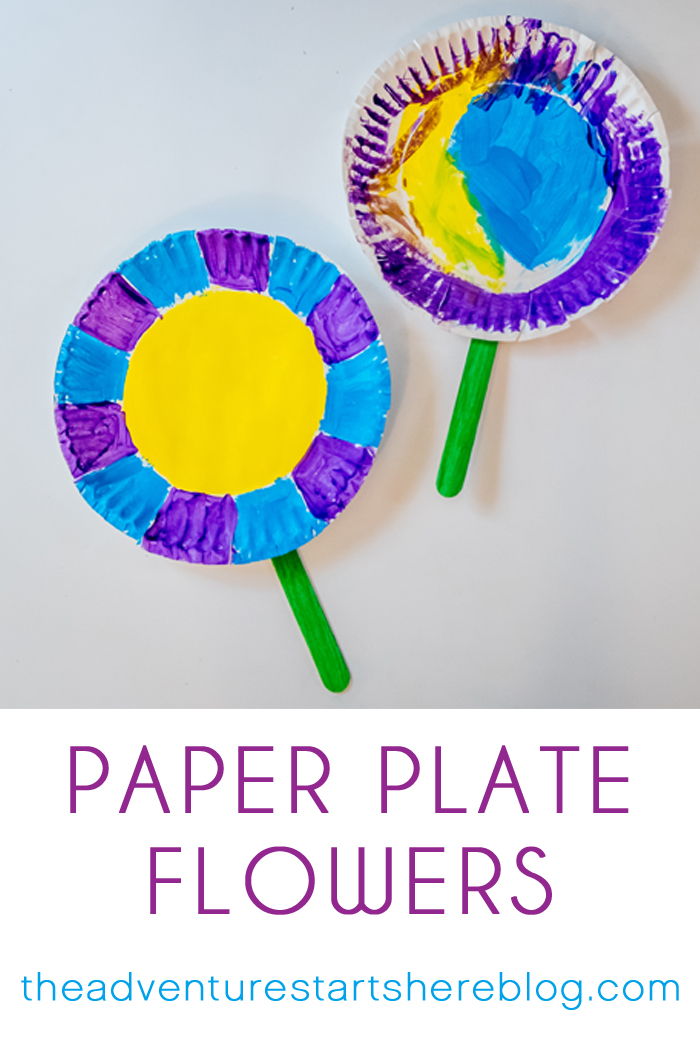 Materials:
Paper plate
Tempura paint (in your choice of colors)... if you are serious crafters, we have this set that just happen to have squirt tops
Craft stick
Scissors

Method:
Paint the craft stick green.  I did this myself earlier on so that it would be dry by the time we were assembling the flower. But you could easily have your child do this part too.
Paint the paper plate (flower).  While I personally like the look of painting a center and then individual petals, I also love Noah's more "free style" approach.
Once dry, cut slits into the paper plate to make some petals.  Then attach the green craft stick to the plate.  I used tape, but you could also use glue. 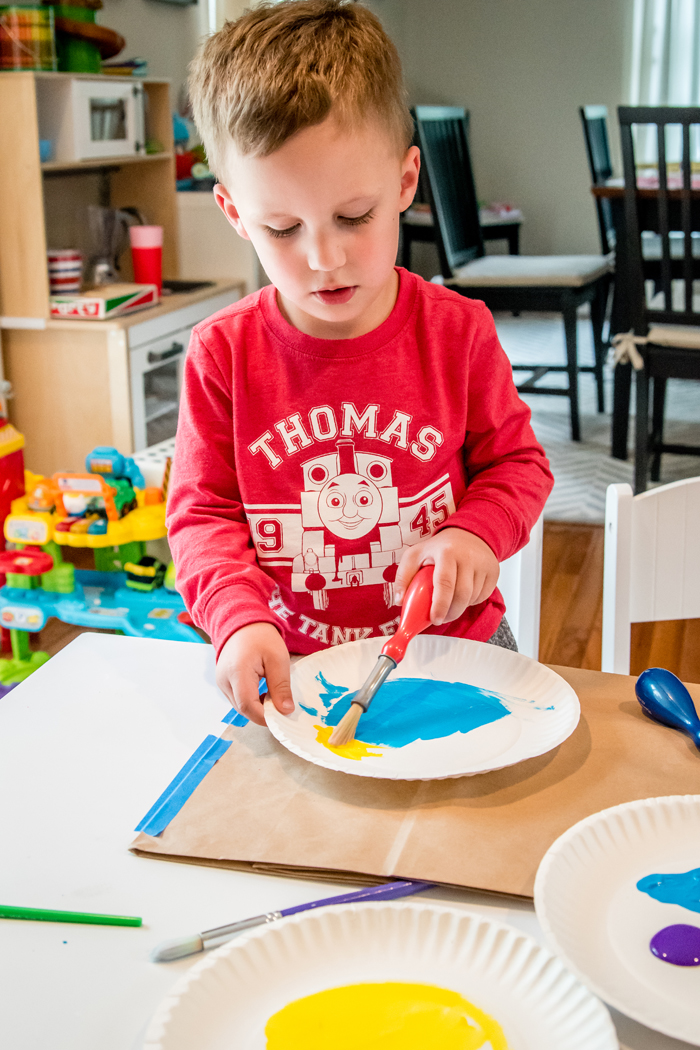 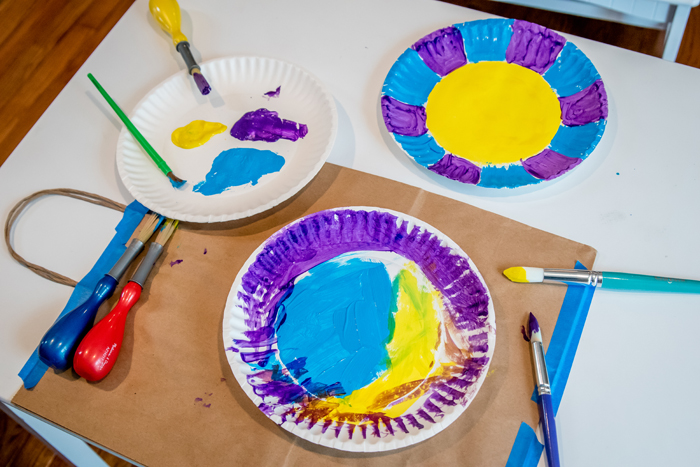 ^^^ usually I put kraft paper down when we paint, but I ran out!  So I grabbed a paper bag I had on hand so I could at least cover Noah's workspace! 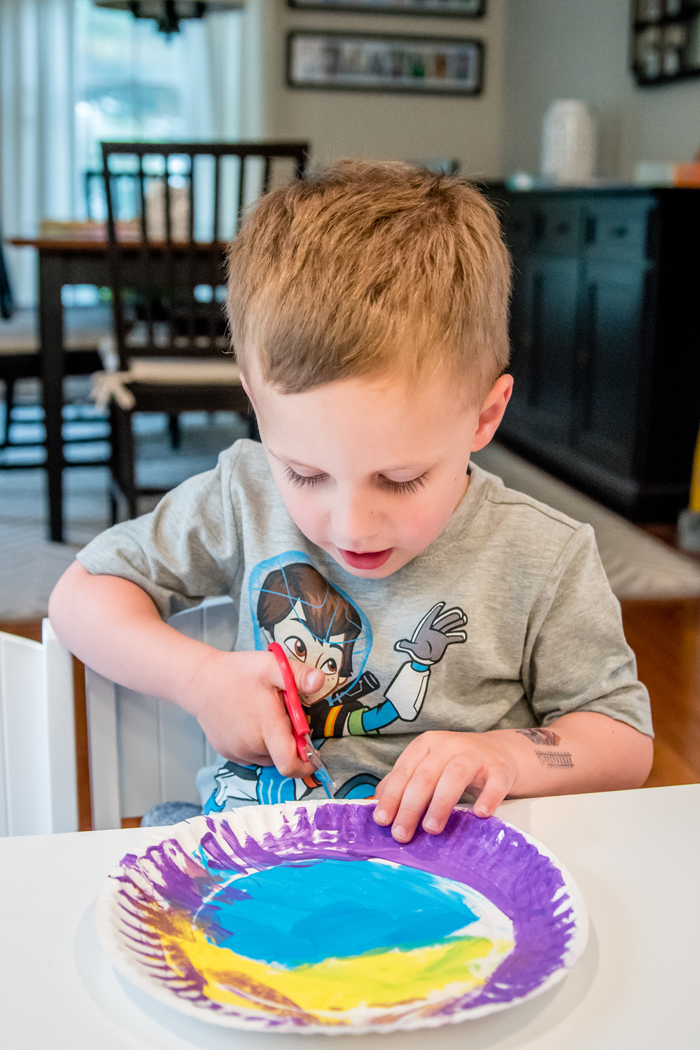 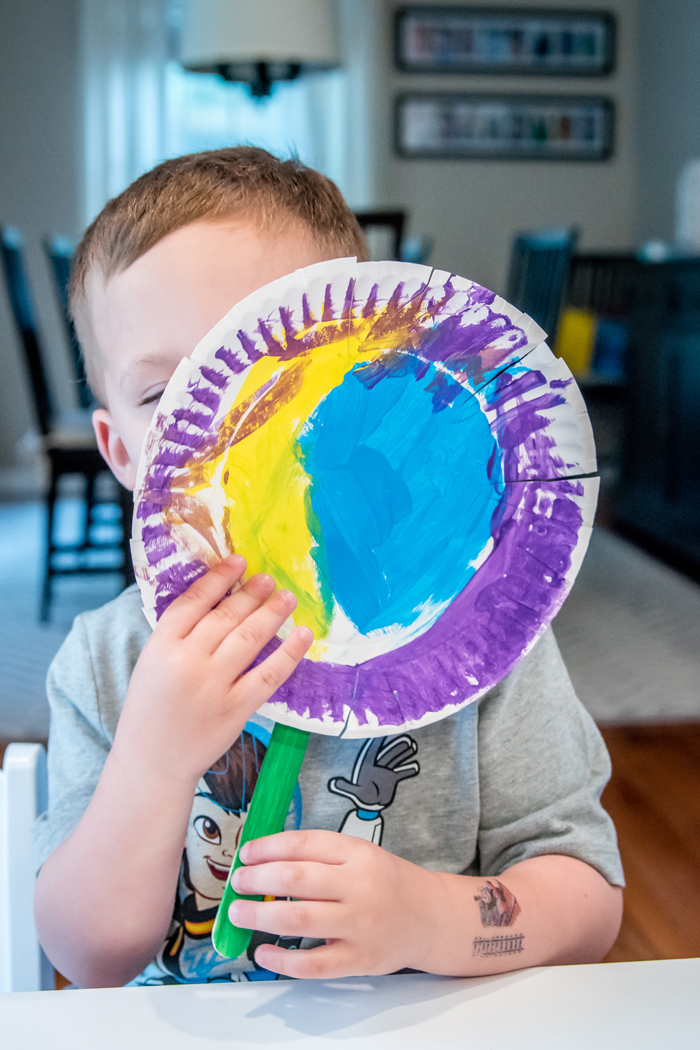 What do you think of our Spring inspired crafts?   Do you prefer to plan crafts for your kids or just let their creative juices flow?

I am linking up with a bunch of my blogging friends (Work it Mommy//Tickled Pink//Sweet Turtle Soup//Our Pretty Little Girls) for their Teaching Together Blog Hop.

*affiliate links used
Meghan at 12:00 AM